Power Supply for the RLTC ECU

Recommend connecting to the same power supply as the vehicle’s ECU since this will not go to ground when turning the engine over.

*Remember launch control will only work on a vehicle with a manual transmission.

Using the terminal to configure parameters 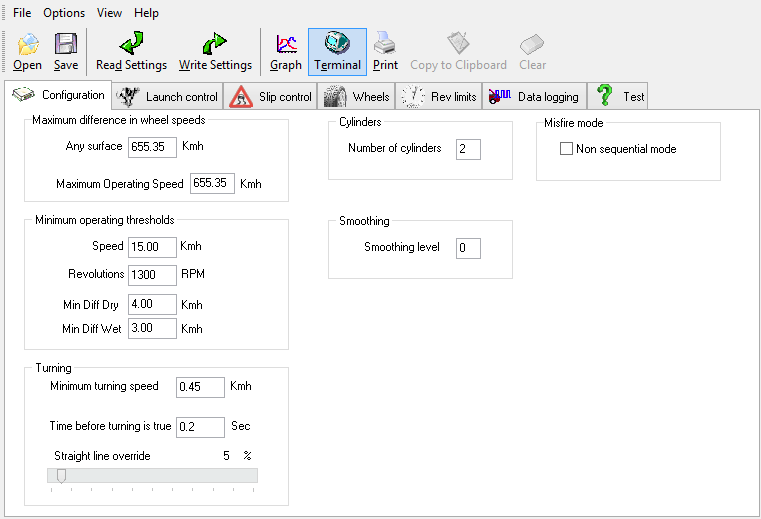 To view other information select Read Settings whilst viewing the terminal screen. You will then be presented with the menu below: Follow the prompts within the terminal to configure settings.

(Note when this value is changed from 65535, the Diagnostic LED will no longer flash to indicate RPM/WSS signals are present, as described in page 22 of the manual)

By inverting the clutch switch on the rev limits tab in the software, this effectively gives you a secondary rev limit just in case the factory one fails, or if you simply want to lower the rev limit of your engine, like ‘Valet Mode’ This is useful if a 3rd party is required to drive your pride and joy.

Batch fire is where one injector signal output from the ECU controls two injectors in parallel. For example, 4 signal outputs on a V8 instead of 8.

If this is the case, then you need to interface with each injector individually. Therefore connect after the signal splits off to each injector.

RLTC on a Mazda RX7

Racelogic Traction Control is wired up exactly the same on a rotary engine as it is on a piston engine. The injectors are wired up as normal, however you must make sure that non sequential mode is ticked in the software.

Please note, even though there are only 2 rotors there are actually 4 injectors: Primary (normal) and secondary (full throttle or full boost on the FD3S)

Basically the best way to do this would be to use an LED, connect the Anode using a 66 Ohm resistor in series with the LED connected to Pin 15 of Connector A, then connect the Cathode to pin 4 of Connector B. That way there will be a drop of 3V across the LED when pin 4 goes to ground during injector cuts but no drop at any other times.

RLTC on a Dodge Viper- Check Engine Light on We can supply a coils module which will replicate these signals – Part Number is TC8COIL-3. Cars with only 3 wheel speed sensors

Some cars have a single sensor for the rear wheel speed that is mounted on the differential e.g. Nissan 200SX and some older Mercedes Benz.  This means that the TC system cannot calibrate itself automatically.  This can only be done via a laptop using the software.

2. Identify which signal wire is from the rear sensor.

This can be done using any of the following methods

If the rear sensor does not use a different number of reference points, you can still locate which traction control channel is connected to it by turning a tight corner. In this situation the rear wheel speed will be the last to change state.

Ensure you change the settings in the ‘Wheels’ tab to reflect the speed sensor connections.