Depending on model type, the LabSat 2 is able to record RF data directly from an active antenna and store the data on a hard drive or generate GNSS RF signals from data stored on a hard drive.

There are three RF ports on the LabSat 2 these are marked CLOCK IN, RF IN, RF OUT. 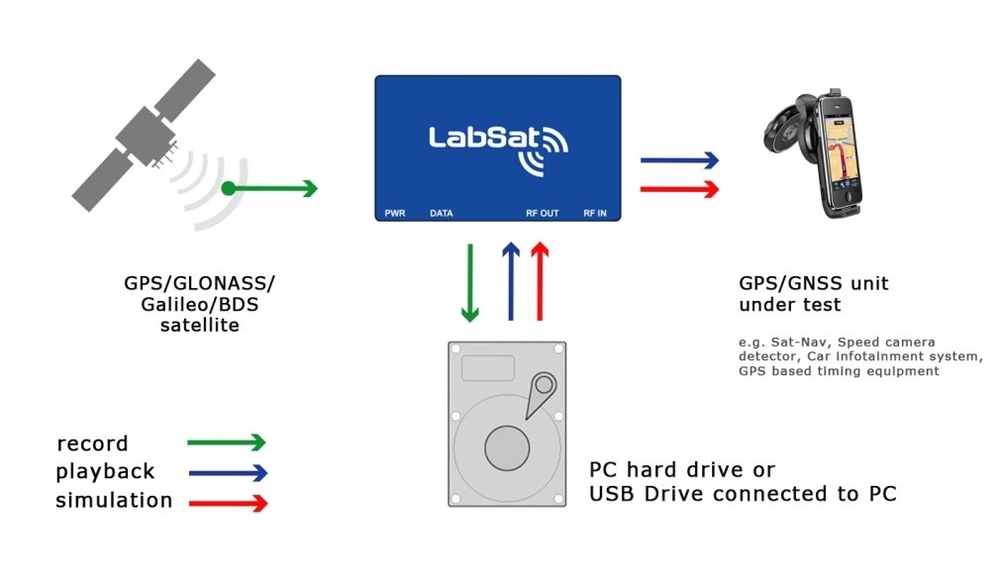 The RF IN socket is used to connect an active GNSS antenna when recording data. During recording, the RF OUT port is switched off to ensure that it does not interfere with the recorded data.

The RF OUT port is used to connect the LabSat 2 to the GNSS system under test. The output signal of the LabSat 2 is at a nominal level of -83 dB when replaying previously recorded data. Using the PC software, it is possible to attenuate the LabSat 2 output by approximately 24 dB giving a signal power range of -83 dBm down to -107 dBm.  Adjustment to the output attenuation is made using the slider controls which is accessed from the RF Attenuation tab in the LabSat software. With the slider positioned to the left on the screen, attenuation is 0 dB meaning 0 dB of attenuation on the nominal -83 dBm output.  As the slider is moved to the right, in 0.5 dB steps, the attenuation increases, and the RF output level is reduced accordingly. The tick boxes allow for each channel to be muted simulating GNSS dropout.

When replaying RF data into a GNSS engine, it may be necessary to increase attenuation in order for the GNSS engine to acquire satellite data.