An important point to note is that DGPS corrections improve the accuracy of position data only. DGPS has no effect on results that are based on speed data, such as brake stop results.

GPS signals coming from satellites down to the ground have to travel through layers of the earth’s atmosphere, so they are subjected to delays. This affects the time taken for the signal to travel from any given satellite to a GPS receiver, which introduces slight error into the GPS engine, causing an error in the measured position.

So, what actually causes these signal delays? First, the signals have to travel through the ionosphere, which is the outer edges of the atmosphere. This bit of the atmosphere is hit by solar radiation, which causes particles to split up and become positively charged. This layer of the atmosphere has the largest impact on electromagnetic signals passing through, which of course includes the radio signals coming down from satellites.

The ionosphere will add a relatively large delay, the actual number depends on receiver location, satellite location, time of day, solar flare activity, etc. A lot of those factors are estimated and allowed for, which then corresponds to a delay of up to 16 ns for the signal passing through - note that this is a rough figure, which is changing all the time. This can introduce up to a 5 m error to the captured position.

The second layer the GPS signals travel through is the troposphere. This is the ‘weather’ section of the atmosphere, so includes conditions such as clouds, rain and lightning. This adds a much smaller delay to the signal of up to 1.5 ns, which can introduce up to a 0.5 m positional error.

These delays are random delays which fluctuate. As such, there is no way to precisely measure what they will be at any given time. Each delay is also specific to every individual satellite, as they are positioned at different areas around the world, so their signals will be subjected to different atmospheric conditions.

This image shows how a delay in time from satellite to GPS antenna can affect the recorded positional data. The red circle shows the ranging error on a single satellite, introduced by atmospheric conditions. 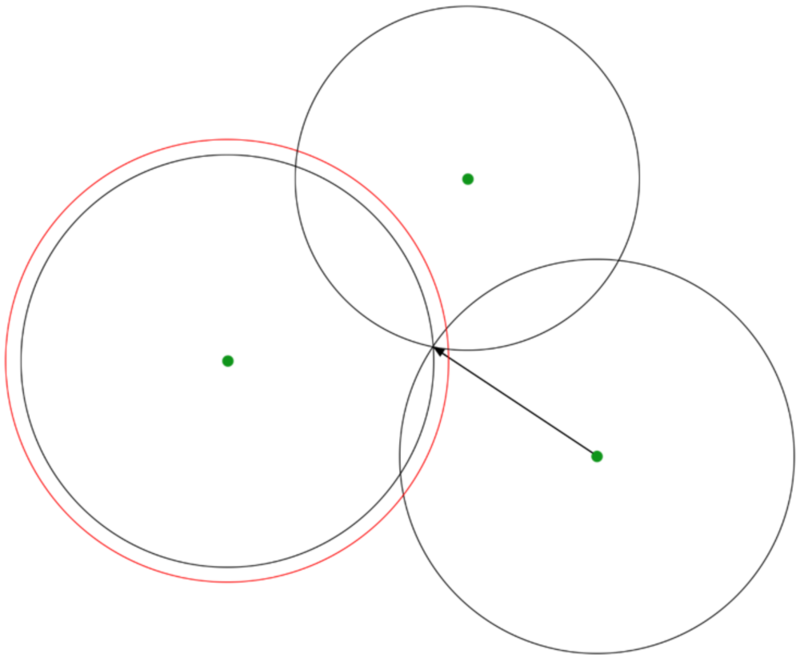 A static base station can be used to provide correction messages to signal delays. This is done by setting the base station up in a set point on the ground, and then working out its exact position on the earth’s surface. This is done by leaving it recording GPS data for as long as possible. Over the time that the base station is capturing data, the ionosphere and troposphere change, causing the delays in the signals to change, randomly. Because the delays are subject to random changes, they can be averaged out.

This image shows an example of a 24 hour positional GPS plot. If the average is taken from this logged file, this provides a very precise measurement for the absolute position of the DGPS base station, removing most of the errors. Another form of signal correction, is to use signals from geo-stationary satellites. These satellites are a set distance above the earth’s equator, and follow the direction of the Earth’s rotation. Objects in geostationary orbit appear to stay in a fixed position in the sky when viewed from the ground.

A network of base stations on the ground sends data to a central PC, which calculates the current positional errors in the area. This information is sent up to the geostationary satellite before being broadcasted back down to GPS receivers. Based on the receiver position, the current correction offset can be calculated.

While this does not increase the level of positional accuracy as much as using a static base station which has done a long term stationary log, it does not require any setup, so is quick and easy to use at any location.

Most professional VBOX units can achieve an absolute positional accuracy of ±1 m when using correction messages from geostationary satellites.

The generic term for these systems is SBAS, which stands for Space Based Augmentation System. The regional systems are called: How do we use this information?

This means we can accurately calculate what the distance between those two points should be.

The ‘real’ signal (shown in red), which has passed through the ionosphere and troposphere, will be delayed by a random amount. The ‘theoretical’ signal (shown in grey), should be a shorter distance. Subtracting the two, gives you a correction which can be applied to that particular Satellite.

Differential GPS is the difference between the ‘real’ distance measurement, and the ‘theoretical’ distance.

For each satellite, a correction signal can be sent to the GPS receiver, which will apply that correction to each measurement that it makes, which will cancel out a large percentage of the different pseudorange errors from each satellite signal. This only works because the receiver is close to the base station, so the signals to both units will have travelled through the same bits of the atmosphere.

What difference does this make?

There is more information here on absolute vs relative positioning.

Because we know the frequencies that these signals are being sent at, we can work out how much each signal has been delayed by from the difference between the two delays.

What different types of frequency are available?

Using the two frequencies that are currently available (L1 and L2C), our VBOX units can get a positional accuracy down to around half a meter.