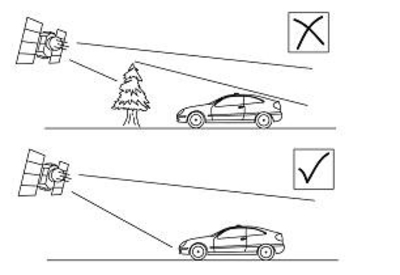 The antenna is a magnetic mounting type for quick and simple mounting to the vehicle roof. For optimum GPS signal reception, make sure that the antenna is fitted to the highest point of the vehicle away from any obstructions that may block satellite reception. The GPS antenna works best with a metal ground plane underneath (a metallic vehicle roof is perfect for this).

Please also note that when using any GPS equipment, a clear sky view is important. Objects in the surrounding area such as tall buildings or trees can block the GPS signal causing a reduction in the number of satellites being tracked, or introducing reflected signals that can decrease the accuracy of the system. Note that clouds and other atmospheric conditions do not affect the PerformanceBox Sport’s performance.

GPS antennas require a ground plane to operate correctly. This helps to reduce unwanted reflections of the GPS signal caused by nearby objects, and usually the metal roof of a vehicle performs this function. However, if a test requires an antenna to be placed either off the vehicle, or on a vehicle that does not have a metallic roof, a special ground plane antenna must be used. This has an internal ground plane and can operate perfectly without the need for mounting on a metal surface. Ground plane antennas are available from your distributor (part number RLVBACS065).

A GPS coldstart forces the GPS engine to reset its downloaded almanac of current satellite positions. This can be useful if the PerformanceBox Sport is having trouble locking onto satellites, which typically occurs if the PerformanceBox Sport has not been used for several weeks or if it was last used a long distance (over one thousand miles) away from the current location.

After performing a GPS coldstart leave the PerformanceBox Sport powered up in a static location where the antenna has an unobstructed view of the skies, for at least fifteen minutes.

There are two ways to perform a GPS coldstart on the PerformanceBox Sport, one with and one without the use of a computer.

Press and hold the square button ’■’ on the side of the PerformanceBox Sport for five seconds. The unit will then beep to indicate that the GPS coldstart is underway.